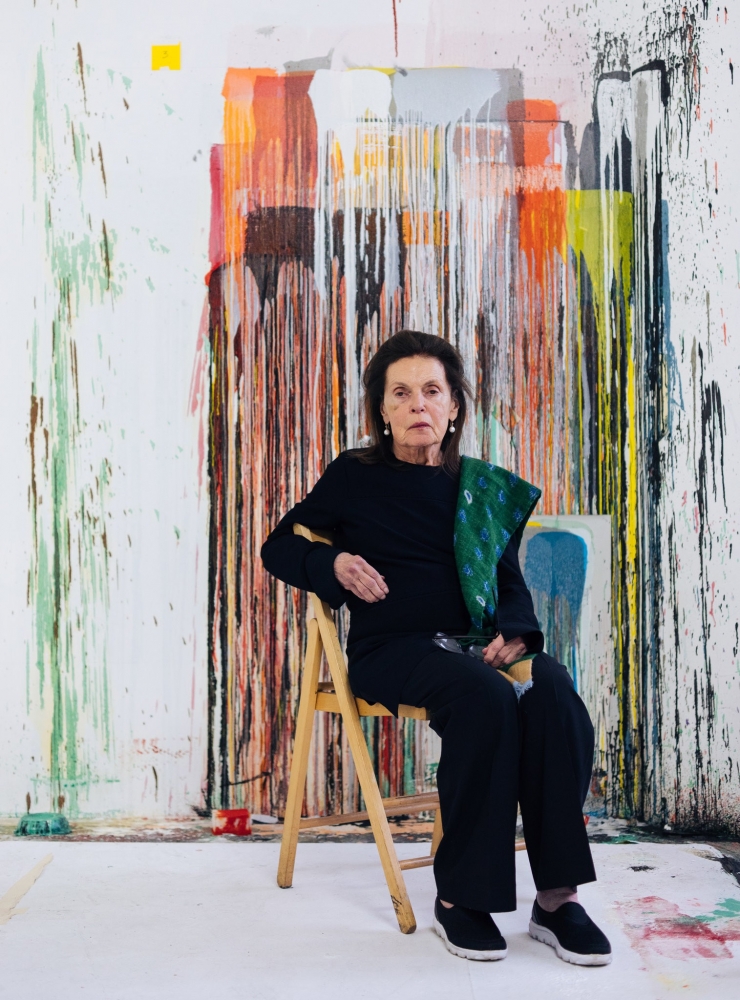 Ms. Steir at an area of her studio where she's testing paint. Since she had a fall she has used an automated lift and not a ladder to reach the top of her paintings.

Acclaimed (then overlooked) during five decades, the painter hits a new tempo in life and art with a show at the Barnes, a documentary and a seven-figure sale.

“Chance can give you a gift,” said Pat Steir, offering a preview of 11 just-completed paintings in her studio in Chelsea. The petite, monastically dressed, 78-year-old artist stood before a monumental black painting, with a row of broad white strokes from which rivulets of pigment spilled down the dark ground.

Ms. Steir allowed the random shower from each brush stroke to determine the composition without further intervention. “In some way, the paintings paint themselves,” she said.

The works are titled Silent Secret Waterfalls and are all seven feet high and as wide as 17 feet, part of an ongoing series that goes back 30 years and traverses the artist’s engagement with abstract expressionism and Eastern philosophy.

“Pat’s Waterfall paintings have this performative, gestural, meditative activity,” said Thom Collins, executive director and president of the Barnes Foundation in Philadelphia. He commissioned the new works for the serene, naturally lit central Annenberg Court in the collection’s home, designed by Tod Williams and Billie Tsien. It is the first time an artist has been invited to make something site-specific for the Barnes since the collector Albert Barnes commissioned his Matisse mural, The Dance, in the early 1930s.

Ms. Steir’s first black-and-white Waterfall painting from 1990 is now hanging in the Metropolitan Museum of Art. She made it by pouring buckets of pigment, thinned with turpentine, down the canvas in many diaphanous layers.

“I was thinking a drippy brush stroke is the symbol of an abstract painting and I was going to make it paint a picture by itself,” Ms. Steir (pronounced Steer) said.

Ever since, she has set up basic parameters about the palette and shape of her canvases and then embraced the serendipitous results of throwing, drizzling and streaming paint from vertiginous heights.

“It’s chance within limitations,” said Ms. Steir, liberated from decisions about imagery she had faced early in her career. “Being more attached to the process than the conclusion, it’s an incredible freedom.”

Ms. Steir commented wryly that she’s been “forgotten and rediscovered many times” in a career stretching over five decades. Yet she has been a mainstay of the art world. She broke through with the first generation of feminist artists in the early 1970s, including Mary Heilmann, Joan Snyder and Elizabeth Murray. “That was a good start,” Ms. Steir laughed. As one of the founders of the 1970s feminist collective Heresies she was nevertheless at odds with the movement’s emphasis on making feminist imagery.

“I became an artist against all odds and nobody was going to tell me what imagery is good for me,” she said, describing her early work as “intimate conceptual art” blending words and pictographs with expressive brushwork.

She lived with the conceptual artist Sol LeWitt through the 1970s and maintains close friendships with her intergenerational peers, including Brice Marden (her classmate at Boston University), Ugo Rondinone, John Giorno, Julie Mehretu and Mickalene Thomas.

Mr. Collins characterized her trajectory as a “powerful slow burn,” bringing increasing institutional and market attention that she has long deserved.

Ms. Steir’s change in representation from Cheim & Read to Dominique Lévy in 2016 (now Lévy Gorvy) was a turning point, putting her work on a high-profile stage. Last year, she joined the small group of female artists commanding seven figures at auction when Elective Affinity Waterfall (1992) sold for more than $2.2 million, with fees, at Phillips New York. Its high estimate was $800,000.

“I was happy that the people bidding on it didn’t demean it because it came from a female,” said the artist, who tells her life story in an intimate, ruminative documentary by Veronica Gonzalez Peña, Pat Steir: Artist, premiering at Lincoln Center in the Jewish Film Festival on Jan. 19.

Next month, she will have a solo show in St. Moritz at the Vito Schnabel Gallery, and she is creating projections of her Waterfall paintings as the sets for the centennial celebration of the choreographer Merce Cunningham on April 16, at the Brooklyn Academy of Music.

This project feels special to her because Cunningham’s longtime partner, the composer John Cage, was a close friend (he joined Ms. Steir and her husband, Joost Elffers, on their honeymoon in 1984). Mr. Cage’s ideas about chance profoundly influenced her dramatic change in working method five years later, when she began to explore the incident and accident of pouring paint.

The significance of chance occurrences was driven home a year ago on New Year’s Day, when the artist had a bad fall. It didn’t involve the 10-foot-tall ladder in the painting studio, from which she had done a high-wire balancing act for decades, but a slip in the kitchen.

During her arduous, five-month recovery, she was largely immobile and worried about her ability to walk (she still uses a cane). Facing the biggest commissions of her life, she began to analyze the components that made her original Waterfall paintings successful. (She had bragged to Mr. Elffers at that time that she had the “hot hand” of a basketball player “who couldn’t miss.”)

She now uses an automated lift to reach the top of her paintings. And though she is moving more slowly, she still paces off her canvases and flings paint from her loaded brush so that it lands in calligraphic arcs. The tennis champion Billie Jean King, who once visited her studio, commented on the strength of Ms. Steir’s backhand.

The artist Kiki Smith said, “I’m very moved by Pat’s tenacity and clarity.” Describing herself as one of the many “wayward people” taken in on holidays at Ms. Steir’s townhouse in Greenwich Village, Ms. Smith added, “She’s been the center of a wheel in a community.”

The two women became close after Ms. Steir appeared on the cover of Artnews magazine in 1985. Ms. Smith, 14 years her junior, sent her a postcard saying, “If you can do it, I can.” She was prompted to write by Ms. Steir’s discussion of becoming something “unimaginable.”

“It was unimaginable to everyone around me that a small girl — not even a big strapping girl — could live a life as an artist and stay alive and committed,” Ms. Steir said. Her father had gone to art school but, with four children to support, couldn’t achieve his dream of being an artist. He encouraged his daughter to be a poet because he thought she would make more money.

“I kept in my head the idea that I’m going to do this, and it’s going to mean something — maybe not to everybody but to somebody,” she said.

With the Barnes paintings completed, Ms. Steir is diving into her largest site-specific commission yet, to open in October at the Hirshhorn Museum and Sculpture Garden in Washington. She is painting 28 large canvases with the spectrum of colors in gradation, turning the museum’s inner circular gallery into a monumental color wheel.

Asked what drives her to keep working, Ms. Steir noted that Ruth Bader Ginsburg had shown up to work at the Supreme Court with three broken ribs and that the House Speaker Nancy Pelosi “is as smart as ever and looks as good as ever.”

“If you feel that you have to do what you do, for whatever reason, either political, public or private reasons,” she said, “you just go on doing it.”