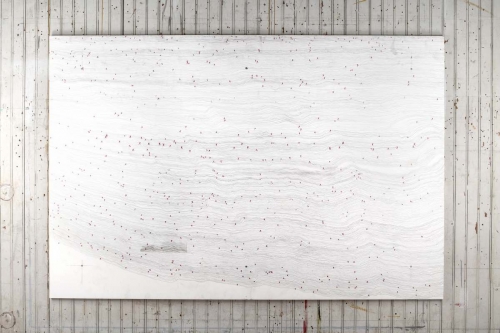 One of the critically acclaimed contemporary artists best known for his diverse, yet the cohesive artistic practice is an American artist Tom Sachs. For the last three decades, he has been producing hybrid works somewhere in between readymade, sculpture in extended field and installation. As a matter of fact, Sachs managed to construct a specific aesthetic in which brand icons, symbols of Modernist utopianism, and commodities of capitalist culture become one. By exposing their making process, Sachs questions the notions of authenticity and ephemera in order to reveal the perfidy of the capitalist market.

His latest project called The Pack will be presented for the first time at Vito Schnabel Gallery and will include new and recent sculptures based on the artist’s longstanding fascination with the nation of Switzerland.

The Critique of the Nation State Branding

Tom Sachs perceives Switzerland as an idealized brandknown for its wealth, economic stability, political neutrality in global affairs, standards of health and living, technological and architectural domains, and most importantly its protected landscapes of immense natural beauty. The artist subverts that imagery by questioning is that country a utopia in a world saturated with right-wing populism, migrant crises and raging debates over definitions of nationality. To be more precise, Sach uses the public image of Switzerland as a perfect content to critically articulate the questions of authenticity, artificiality and is ‘being Swiss’ a luxury for the privileged.

It is important to add that Switzerland appeared in as a reference in the projects that the artist released in the early 1990s; for example, he did a performative action by leaving a pile of vinyl stickers covered with the provocative phrase Nuke the Swiss on the reception desk of Deitch Projects New York in 1996.

This particular exhibition The Pack is referring directly to Joseph Beuys’s seminal 1969 installation of the same name (consisting of a Volkswagen van with twenty-four wooden sleds positioned from open rear doors). In Sachs’s homage, the materials on sleds are a reference to the Pontifical Swiss Guard. Three fully functioning electric motorcycles, each named for a city in the African states (ie. Lagos, Mogadishu, Kinshasa), are packed with Swiss blankets, flashlights, a machete, and a BB gun. It is a direct comment on the Swiss colonial past since the Swiss guards were originally mercenaries instated by Pope Julius II in 1506 for their reputation as loyal and invincible soldiers.

The sculpture Heidi borrows a name from a celebrated novel by Johanna Spyri, which tells the story of a young orphaned girl raised by her grandfather in the Swiss Alps. According to Sach’s interpretation, this 19th-century heroine is presented in a form of a coffee-making robot that expels caffeine from her exposed tube. That has to do also with a longstanding image of a milkmaid which is a symbol of the female anatomy, fertility, and eroticism. Here, the artist comments our daily commodified rituals and social patterns, in this case, of tea and coffee consumption.

The audience will also be able to see two new paintings titled Switzerland and Maximum Luminosity. Both paintings deal with geopolitical and economic issues; the first one employs the landscape of Africa to emphasize the questions about identity and belonging by exposing twenty-six cantons of the Swiss Confederation after Africa’s sovereign states, proposing a redistribution of wealth. Maximum Luminosity, on the other hand, features Uganda’s coat of arms as a commentary upon the fate of a land rich in natural resources but subjected to the ultimate exploitation.

On display will be also the work SA111 produced this year. It is a tribute to the people tragically killed in 1998 when a Swiss Air jet crashed in Nova Scotia while flying from New York to Geneva. Interestingly so, this aircraft carried a cargo including cash, gold, luxurious watches and jewelry, diamonds, and Picasso’s 1963 painting Le Peintre. The last two pieces which will be presented are the 2018 painting Moon inspired by man’s lunar odyssey, and Wall Drawing Number One from 2017 which commemorates the conceptual influence of Sol LeWitt.

Undoubtedly, each work in this comprehensive exhibition is conceptually precise and solid for itself, but the best possible effect for the viewers will be achieved after all of the works start communicating with each other.

Tom Sachs The Pack will be on display at Vito Schnabel Gallery in St.Moritz from 28 December 2018 until 3 February 2019.