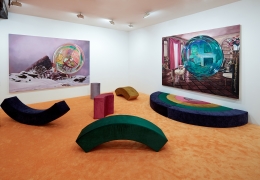 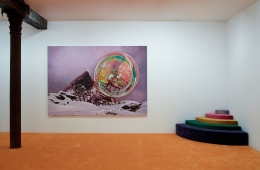 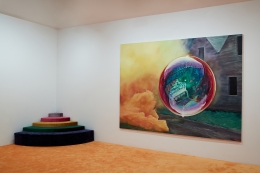 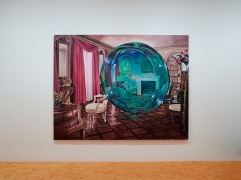 Opening October 1, 2020, Vito Schnabel Projects will present Ariana Papademetropoulos: Unweave a Rainbow, the first New York City solo exhibition for the Los Angeles-based artist. Unweave a Rainbow will debut a new series of large-scale works by the artist, in which she mingles images of natural phenomena with her meditations on interiors as analogs. The exhibition will also feature new small-scale additions to her ongoing series of ‘symbolist’ paintings.

Unweave a Rainbow takes its title from the work of nineteenth-century English poet John Keats, who denounced physicist and astronomer Sir Isaac Newton for emptying rainbows of their poetry by explaining in scientific terms the phenomenon of refraction and its effects on human visual perception. Keats felt such information undermined the pleasure of seeing a rainbow in the sky by “reducing it to prismatic colors.” In spite of being thus unwoven, the rainbow persists as a symbol of childlike hope and future promise. Its meaning is bound between spiritual interpretation and scientific discovery, much as Papademetropoulos’ painting is bound between depiction and suggestion, realism and fantasy.

Papademetropoulos will transform the gallery’s space into a total environment, an enclosed sensual world of plush orange carpeting and sculptural modular floor cushions comprising rainbows. The velvet cushions, arranged in the corners of the room, can be taken apart and moved around, intended for viewers to lounge on the unwoven rainbow while taking in the prismatic color and uncanny content of her paintings. Visitors will find themselves in one of the artist’s constructed scenes, while the paintings become portals into other worlds, much like Papademetropoulos’ bubbles.

Ariana Papademetropoulos is known for exploring the psychological effects of interiors and domestic spaces. Evoking a sense of shifting realities and parallel worlds, she depicts dream-like hyperreal scenes of lavish rooms that are often eerily empty of human presence. The surface of her imagery is usually ruptured by a large, soft-focus watermark or spill that introduces alternate dimensions of dazzling color. By piercing the illusion of her own underlying composition, Papademetropoulos captures the experience of awakening from a vivid but elusive dream, to find oneself still teetering between parallel realities. In the new paintings on view in Unweave a Rainbow, the watermarks and spills of earlier canvases are replaced by large bubbles that hover somewhat ominously in the visual frame and transport the viewer to a place and time beyond the painting’s basic subject matter. Enigmatic but insistent, these apparitions suggest a state of reverie animated by nostalgia.

Rooted in hyperrealism, Papademetropoulos’ art implores illusion to collapse realities into surreal tableaux of flux, transience, and contradiction. Her canvases hold space for both reality and fantasy, for the impossible and possible to collide or coexist. In her latest paintings, quiet and wistful microcosmic worlds are contained with giant soap bubbles, a common motif in the history of art that became popular in seventeenth-century Dutch vanitas paintings as allegorical representations of fleeting time and the fragility of life. The act of blowing bubbles, most commonly associated with children, was relieved of its somber burden in the eighteenth century by the French painter Jean-Baptiste-Siméon Chardin. In his genre paintings, the bubble shifted from a moralizing emblem to one replete with lightness, wistfulness, and longing for youthful innocence.

In Espulsione dalla discoteca (2020), the first of three monumental paintings debuting in Unweave a Rainbow, Papademetropoulos depicts the exterior of an abandoned house cast in eerie shadows. While the windows of this home are darkened and a spectacular cloud of mustard smoke obscures the architecture and landscape, a bubble hovers in the foreground containing an alternate realm: its iridescent surface of glittering scarlet, violet, plum, and gold enclose an enchanting English garden populated with a leafy bench and bed of flowers. Papademetropoulos, who draws inspiration from magazines and books, has here been influenced by an image from a back issue of National Geographic Magazine. Countering its depiction of the forest devastation that was inflicted by the widespread use of Agent Orange during the Vietnam War, the artist has here married an idyllic moment of pastoral bliss with the danger of an ominous fog.

These bravura paintings will be complemented by a selection of small works from the artist’s ‘symbolist’ series depicting specimens of natural world: a flower, crystal, a seashell. With their surreal, tragicomic aura, these paintings are Papademetropoulos’ response to Ancient Roman poet Ovid’s Metamorphosis and The Secret Life of Plants, in which Peter Tomkins and Christopher Bird examine the neurobiology of plant life. Reflecting on the social and communicative abilities of plant intelligence, the artist anthropomorphizes each of her subjects: a soft, teary eye gazes outward to meet our glance, evoking and winking at tropes of tragic female beauty that are rooted deeply in classical mythology.

Ariana Papademetropoulos (b. 1990, Los Angeles) received her BFA in 2012 from California Institute of Arts with a minor in Cultural Studies. She also studied at the Universität der Künste in Berlin. Papademetropoulos’ work has been exhibited in the US and in different locations internationally, including at Jeffrey Deitch, Los Angeles, CA; Manifesta, Marseille, FR; Wilding Cran Gallery, Los Angeles, CA; Soft Opening, London, UK; Annarumma Gallery, Naples, IT; and The Breeder, Athens, GR. In 2014, Papademetropoulos co-curated and participated in the group exhibition Veils, which was held at The Underground Museum in Los Angeles.

The gallery will be open Monday - Saturday by appointment. Please click here to make an appointment, or email info@vitoschnabel.com. 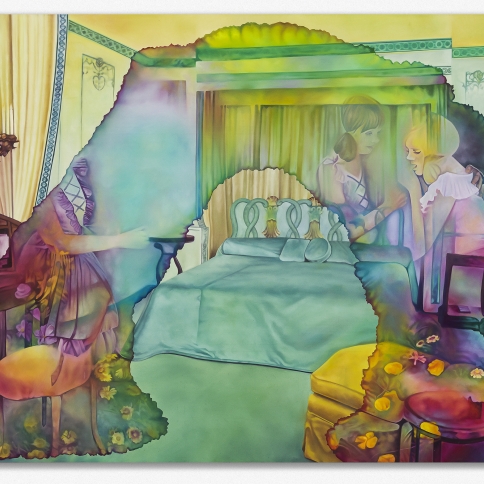