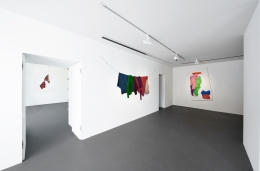 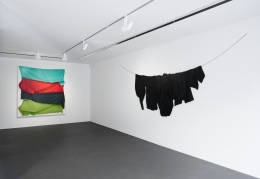 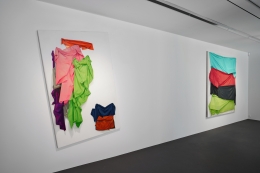 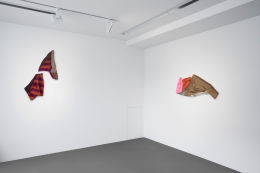 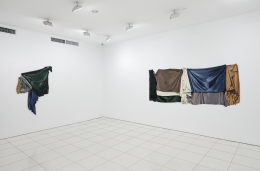 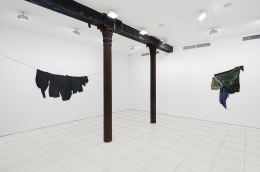 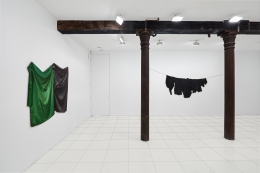 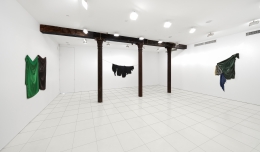 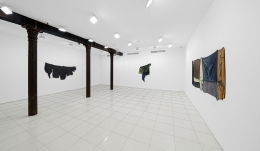 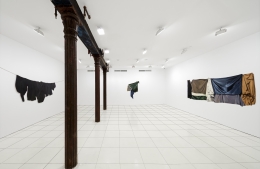 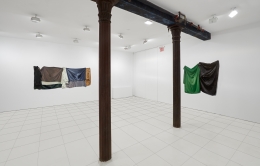 Vito Schnabel presents a two-part exhibition in the U.S. and Europe, devoted to the radical early canvases of New York-based artist Stephen Posen (b. 1939). Threads: Paintings from the 1960s and ‘70s features a selection of the artist’s works which have never been publicly shown. The exhibition is the first significant presentation to revisit Posen’s breakthrough shaped canvases and related paintings since his debut at New York’s SoHo gallery OK Harris, nearly five decades ago. The exhibition will be accompanied by a fully illustrated catalogue with a text by Alex Bacon.

In the late 1960s, as prevailing abstraction began to give way to a proliferation of defiant and eschewing ‘isms,’ Stephen Posen emerged on the downtown scene of Manhattan as an inaugural and prominent figure of a new American Realism. He had recently returned from a two-year Fulbright fellowship sojourn in Italy, where he immersed himself in the art and architecture of centuries past. Liberated and charged by the influence of Renaissance and Baroque masters, and struggling to address age-old questions that still challenged the frontier of 20th century painting, Posen crystallized a vision and style that were astonishingly modern and fresh. His work explored a painterly paradox in which pictorial illusion and spatial perception grapple. His uncanny cut-outs from this period acknowledge a sculptural impetus, imitating draped fabric and hanging clothes with an exacting verisimilitude that probes at aesthetic and intellectual curiosities about form, representation, flatness, and depth. These investigations course through Posen’s art to this day.

Lyrical, bold, and energized with compositional tensions, Posen’s work of the late 1960s and early ‘70s embraced a dialogue of opposing impulses that simultaneously merged and rejected notions of Classicism, Abstract Expressionism, Pop, Minimalism, and even Photorealism. In 1972, The New York Times’ art critic John Canaday expressed delight at such burgeoning evidence of a new figurative movement in his review of the Whitney Museum’s Annual Exhibition of Contemporary American Painting: Posen’s illusional painting is a “tour de force that revives the quality of magic that painting held in its recreation of three‐dimensional still life on a two dimensional surface before the invention of photography.”

About the Exhibition
In 1964, Stephen Posen graduated with an M.F.A. from Yale and soon thereafter departed for Europe on a travel grant alongside fellow classmates Richard Serra, Chuck Close, and Nancy Graves. Fierce friends and ambitious competitors throughout their formative training, Posen and Close first studied at the Norfolk School of Art, Yale’s Summer School program in 1961, along with Brice Marden, Vija Celmins, and David Novros, before arriving in New Haven as graduate students the following year. Dubbed the ‘Crown Street group’ (for the address of the brownstone they occupied on campus in their final year), Posen and his classmates fostered a sense of community and intensified learning that pushed them all to stretch their capabilities. Art historian Irving Sandler has written that Posen and his classmates recalled “the positively charged energy they generated and the prodigious amount of work they stimulated each other to do. It was as if they had to demonstrate their superiority to everyone else and each other by working harder than they had before. The work regimen imposed by student on fellow student...was rarely lost in later life.”

While living in Florence, Posen was mesmerized by the city’s architecture, its churches and museums. He had studied Renaissance painting with Charles Seymour at Yale; however, like so many American postwar artists, Posen was unprepared for history’s enveloping force when experienced in situ. He traveled throughout the Italian countryside, immersing himself in the treasures of Padua, Assisi, Mantua, and Venice. Struck by the radicality of Piero della Francesca and the architectural presence delineated in frescoes by Giotto and Tiepolo, he began to develop a vision for a new way of painting that took up the same questions that Renaissance and Baroque masters had engaged.

Drawing the physicality of architectural environments into his work, Posen set about creating sculptural constructions from simple actions of folding and draping clothes in order to build an image that he would faithfully render in paint on cut and shaped masonite, aluminum, or board. When Posen settled in New York in 1967, these works were discovered by Ivan Karp, then working at Leo Castelli Gallery. Credited with launching the careers of Andy Warhol, Roy Lichtenstein, and Tom Wesselmann, among other Pop icons, Karp founded the OK Harris Gallery in SoHo in 1969, as a platform to introduce Photorealism to the public. Granting Posen three one-man shows, he debuted the young artist’s work in New York in 1969, with subsequent exhibitions in ’71 and ’74.

At Vito Schnabel’s New York project space, four definitive canvases offer a rare look at Posen’s achievements in the seminal period between 1967 and 1969. Painting and sculpture, representation and illusion, material opacity and transparency, weight and weightlessness collide, inviting the viewer to shift focus between nuanced conundrums of spatiality and perception. Similarly, Untitled (1968-69) reveals Posen’s unique ability to employ color and form to develop a three-dimensional sensation of great physicality and mass. Composed in a reduced, richly saturated palette of metallic blacks, blues, and greys, this sculptural work is a rigorous formal arrangement of garments and clothes that the artist layered, draped, and folded in his studio. Drawing upon the trompe l’oeil tradition, Posen takes into account each and every exacting detail of the material’s tactile surface — from the way light bounces off of each item of clothing, to the formation of shadows in the creases and folds — to render a painting whose illusion is extraordinarily evocative of spatial volume in reality. Other works like Tuxedos (1968), which portrays loosely strewn, deep black formalwear draped over an actual clothesline, evidences Minimalism’s emphasis on the ‘objectness’ of the canvas and the impending influences of Richard Serra and Process Art (likewise drawing parallels to the soft materiality of Robert Morris’ felt pieces, which investigated effects of gravity: piled, stacked and hung from the wall).

In St. Moritz, Posen’s earliest cut-out from 1966 will be on display. Illustrating crumpled garments saturated in velvety, bold hues, the textile volumes in this painting show Posen’s embrace of Baroque trompe l’oeil technique and reveal his underlying interest in gravity as a medium in itself. In this work, the artist manipulates illusory space by subverting the implied depth of the pictorial image while complementing its fullness. One can also discern here the faint brushwork of Posen’s formative roots in Abstract Expressionism, which he has resurrected through the painterly techniques of color, texture, movement, shadow, and light. Recalling the tactile plasticity and material richness that aspires to the painterly surfaces of the Venetians (and another hero: Vermeer), Posen asserts a new-found mastery over the malleability of his medium, perfecting painterly Realism while yielding to the textural play and expressive qualities of paint.

On view in St. Moritz will be works on canvas that anticipate Posen’s later paintings of cloth-draped boxes, which were presented under the direction of Swiss curator Harald Szeemann at Documenta V in 1972. Larger in scale than the artist’s shaped cut-outs, these six and a half foot canvases conjure associations to Post-Minimalist sculpture. For the first time we see Posen begin to incorporate spatial elements of his surrounding architecture. In Untitled (1969), billowing drapery fabrics engage the studio wall and project from it. In other compositions, such as Untitled (1970), Posen creates formal arrangements of greater planar complexity. He affixes fabrics to the wall in flattened and heightened relief, concealing hidden boxes and creating angular volumes that project outward and invade the viewer’s space. In Untitled (1970), the composition is delineated by four colored fabrics stacked in vertical orientation; each cloth conceals and suspends the weight of a hidden box. Posen created these pictures on a one-to-one scale of models he built. Obtaining a commercial-grade forklift to execute his vision, he used the industrial machine to transcribe and assess the spatiality of his relief’s view points and levels.

Astutely aware of the great influence that Italy bore on the development of Posen’s highly unique visual language, Dore Ashton equates the artist’s working process to that of fresco painting: “to work much as the fresco painters had worked, square-foot by square-foot. His intention was to avoid the physical tradition of oil paint.”

His work is held in the collections of the Museum of Modern Art, New York; Solomon R. Guggenheim Museum, New York; Pennsylvania Academy of the Fine Arts, Philadelphia, PA; Nelson-Atkins Museum of Art, Kansas City, MO; Virginia Museum of Fine Arts, Richmond, VA; and the Georgia Museum of Art, Athena, GA, among others. Posen is the recipient of a Fulbright Grant (1964-1966) and Guggenheim Fellowship (1986-1987).

He currently works in both his New York and Bucks County, PA studios. 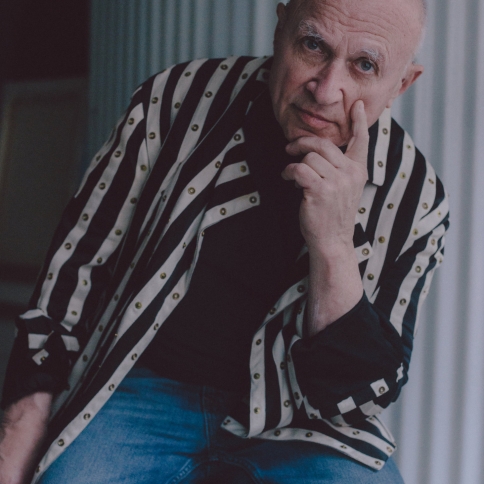 Stephen Posen Knows How to Fashion a Line. So Does His Son.
Ted Loos, New York Times MAY 1, 2018 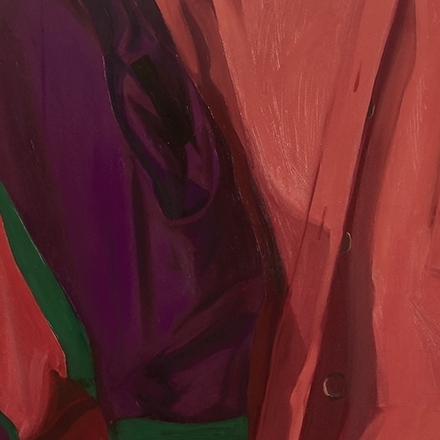 9 Art Shows to See This Week On and Off Frieze Island
Brian Boucher, Vulture Apr 30, 2018