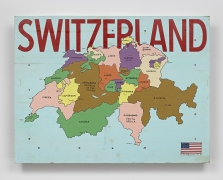 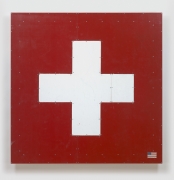 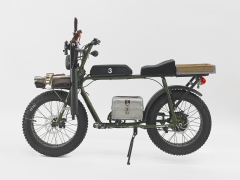 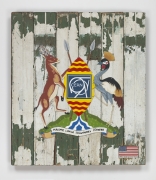 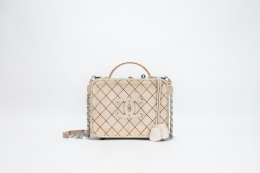 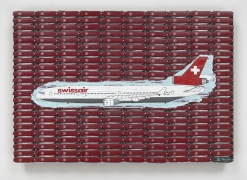 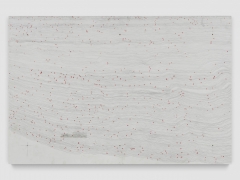 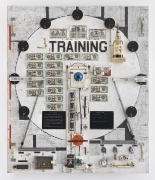 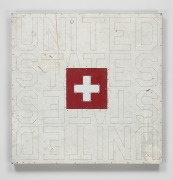 Beginning December 28, 2018, Vito Schnabel is pleased to present its first solo exhibition with New York–based artist Tom Sachs. The Pack includes new and recent sculptures that materialize the artist’s long-standing fascination with the nation of Switzerland and the pristine bliss that stands at the heart of the ‘Swiss brand’.

Over the last three decades, Sachs has been driven by what he describes as “a desire to remake the world not as it is, but the way it ought to be.” Employing his signature technique of bricolage, he assembles collected materials to construct objects that critique modernity. Creating one alternative universe after the next, Sachs sculpts grandiose projects of ‘sympathetic magic’: a universe of brand icons, symbols of Modernist utopianism, and commodities of capitalist culture are transformed into deceptively humble totems. The do-it-yourself aesthetic, comparative modesty, and obscure wit of the physical objects he constructs serve to elevate the process of artmaking to something far more meaningful – more valuable – than any of the commodities he reimagines. By exposing the steps involved in their making, Sachs’s objects suggest unexpected narratives about the complexities of the cultures and societal systems he so carefully deconstructs and refashions.

As an idealized brand, Switzerland has long held fascination for Sachs, who has been drawn to its reputation as a global model of wealth and economic prowess; political neutrality in global affairs; standards of health and living; leadership in technology, architecture, and engineering; first-class transportation and infrastructure; and protected landscapes of sublime natural beauty. But the image of the Alpine nation’s perfection is transformed in Sachs’s work. A society widely assumed to be so progressive and democratic represents the ultimate status symbol of global citizenship and international identity. In a world boiling with political tensions over immigration policies, political storms over refugees, and raging debates over definitions of nationality, the seemingly stalwart rituals, icons, and cultural references of Alpine state invite reflection upon the follies of utopia. Switzerland provides Sachs rich territory for exploring questions of artificiality, authenticity, and what it means when ‘being Swiss’ becomes a luxury commodity in itself.

The Pack follows Sachs’s exclusive site-specific project Building #3, presented by Vito Schnabel in collaboration with The Bridge in August 2018 in Bridgehampton, New York.

As a prelude to the St. Moritz exhibition, Vito Schnabel Projects New York presented Sandcrawler (2016–2018), a sculptural work that is also a fully functioning mezcaleria, which was on view December 1 - 13.

About the Exhibition
Switzerland began to appear as a reference in Tom Sachs’s art in the early 1990s. In what he today refers to as a “Surrealist-punk gesture” and “act of vandalism,” the young artist deposited a pile of vinyl stickers emblazoned with the provocative phrase “Nuke the Swiss” on the reception desk of Deitch Projects New York in the spring of 1996. Sachs’s free art found its dark humor in the suggestion that anyone would willfully bomb the place and the people in possession of world’s wealth.

Two decades later, Sachs’s exhibition at Vito Schnabel takes its title from the artist’s latest sculptural invention The Pack (2018), which itself references Joseph Beuys’s seminal 1969 installation of the same name. Beuys’s work consisted of a Volkswagen van disgorging twenty-four wooden sleds from open rear doors. Each sled was equipped with a felt blanket, a flashlight, and a lump of animal fat — objects providing protection, navigation, and sustenance in an emergency to ensure primitive survival. In Sachs’s sly homage, the materials of the German Beuys morph into a reference to the Pontifical Swiss Guard. Three fully functioning electric motorcycles, each named for a city in the African states (ie. Lagos, Mogadishu, Kinshasa), are outfitted with Swiss blankets, flashlights, and such tools of ancient and modern warfare as a machete and a BB gun. The artist has equipped each of the three vehicles with a postmodern survival kit including snacks. When activated in ritualized joy ride, this moto-pack becomes a symbol one of the world’s oldest intact military units—the Swiss guards were originally mercenaries instated by Pope Julius II in 1506 for their reputation as loyal and invincible soldiers—while evoking the chaotic energy Beuys promulgated as essential to social progress.

Another icon of Swiss heritage serves as inspiration for the sculpture Heidi (2018), which references the beloved 1881 novel by Johanna Spyri, chronicling the life of a young orphaned girl raised by her grandfather in the Swiss Alps. Here, however, the wholesome 19th century folklore heroine is refashioned as a symbol of sensuousness and arousal, ubiquitous 21st century commodities. Art historically, the milkmaid and the open jug from which she pours are well-established stand-ins for female anatomy, fertility, and eroticism. Sachs makes these references explicit, transforming the milkmaid into a faceless coffee-making robot that expels caffeine from her exposed spout. The pleasures and absurdities of ritualized consumption—from the Zen tea master and Japanese traditions of chanoyu, to self-crafted rituals of our morning cup of coffee or our mass consumption of the barista’s trade—are elements in Sachs’s ongoing study of rituals and social patterns.

In two new paintings, Switzerland (2018) and Maximum Luminosity (2018), Sachs employs the landscape of Africa to draw our attention to issues of geopolitical and economic consequence, raising barbed questions about identity and belonging. Demarcation lines that divide Africa into 54 independent countries do not reflect tribal regions or cultural concentrations, but were created by European colonizers as means to capitalize upon Africa’s natural resources. In Switzerland, the artist renames the 26 cantons of the Swiss Confederation after Africa’s sovereign states, proposing a redistribution of wealth. What if Sierra Leone, where more than half the population lives below the poverty line, was freed from economic distress via the advantage of the legendary infrastructure of Geneva, Europe’s trade and financial center? What if Burundi, one of the world’s poorest nations now struggling to emerge from a devastating twelve-year, ethnic–based civil war, had the resources of Zug, a sleepy Swiss town that has become its nation’s wealthiest canton?

For Maximum Luminosity, Sachs appropriates Uganda’s coat of arms to create commentary upon the fate of a land rich in natural resources but subjected to the scourge of colonizing mismanagement and callousness. Crossed spears flank the logo of CERN, the European Organization for Nuclear Research and maker of the Large Hadron Collider (LHC), the world’s largest and most powerful particle accelerator. On either side of the shield, a Ugandan Kob (antelope) and a Crested Crane are portrayed. The animals stand upon a green mound, evoking the fertile land and lush vegetation through which the Nile River runs, while coffee and cotton plants represent Uganda’s natural resources and primary export crops. Sachs offers up a nearly forgotten sensuality—the rich relationship that once existed between a nation’s environment and people, but which has since been exploited by foreign powers. Here, the phenomenon of maximum luminosity—which results when the opposing powers of radiation outward and gravitational force inward, create a black hole—has become a stand-in for the dangerous limits societal impulses have reached.

References to other alternative worlds created previously by Sachs find echoes in The Pack. SA111 (2018), for example, harkens to Sachs’s flight and space works as it pays tribute to the 229 people killed in 1998 when a Swiss Air jet crashed in Nova Scotia, en route from New York to Geneva. The devastating loss of life (and cargo including approximately 110 pounds of cash and gold, 14 pounds of watches and jewelry, 4 pounds of diamonds, and Picasso’s 1963 painting Le Peintre) was caused by technological failure. SA111 reminds us of the perils that even the most advanced nations face.

Several works in the exhibition also extend to Sachs’s other immersive worlds. Among these are the 2018 painting Moon, inspired by man’s lunar odyssey. Meticulously handcrafted to reveal the qualities of its making, this work resonates as an object of quiet contemplation, devotion, and conquest, tracing the cycles of how we measure our days. Wall Drawing Number One (2017) celebrates the importance of ritualized activity in the artist’s ever-evolving practice, while commemorating the conceptual influence of an American titan who was his close friend. Sachs curated an exhibition of LeWitt’s work at Vito Schnabel Gallery earlier in 2018. 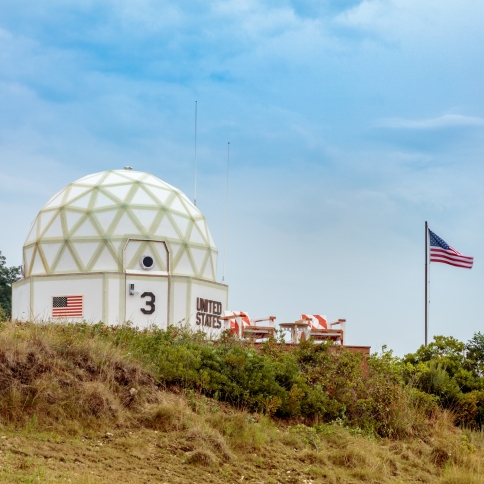 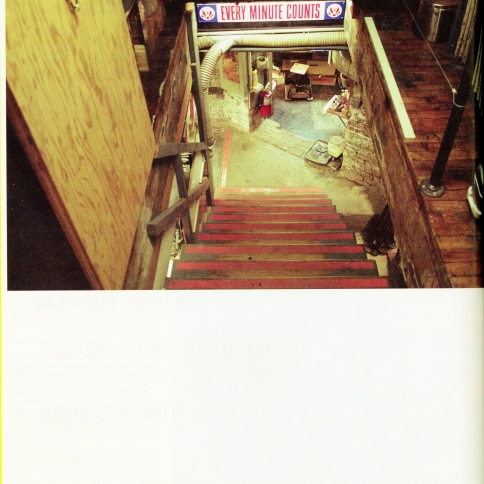 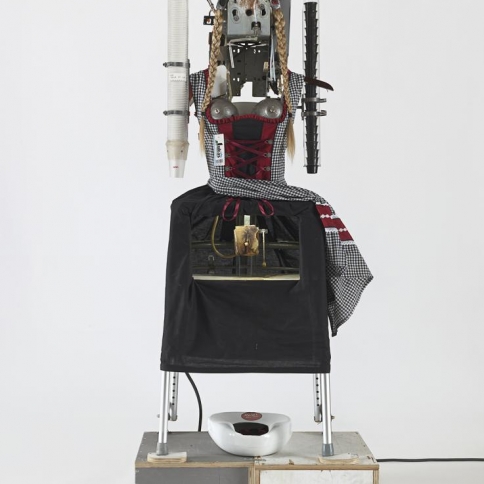 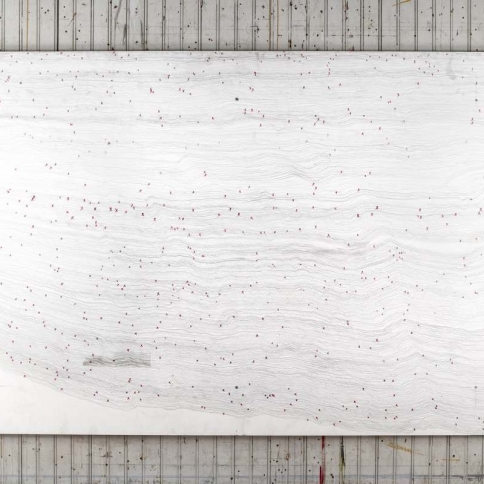 Why is Tom Sachs so Obsessed with Switzerland?
Balasz Takac, Widewalls Dec 16, 2018 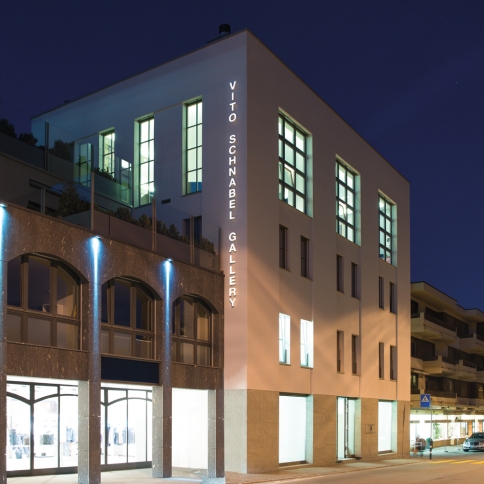