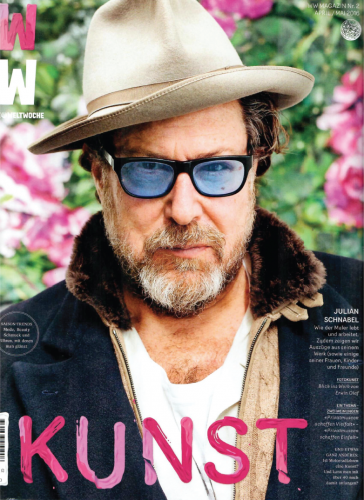 A conversation with the painter - emboldened by plentiful grappa - about himself, his art, his films, his friends, and Maradona’s “airshot”.

Julian Schnabel, 64, is an American painter and film director from Brooklyn, and is considered one of the main figures in neo-expressionism. Schnabel is not only known for his paintings - often very large works that cost over a million dollars - but also for the films he’s directed. These include Basquiat, a portrait of the painter for which he became known for, Before Night Falls with Javier Bardem who was nominated for an Oscar for his role in the film, and Le scaphandre et le papillon for which he won the award for best director at Cannes Film Festival. Schnabel lives in Manhattan in a former perfume factory, which he rebuilt in the style of a Venetian palace.

MvH: Your son shows your paintings in his gallery – are you a proud father?
JS: I think he’s doing a great job. He loves art; he sleeps, eats, and drinks for art. Since he was fourteen he knew he wanted to be an art dealer. I said: “Are you crazy? You don’t even like art.” But even then I said that he could do what he wanted and that I would support him. Now it is nice to see, that he has found his place in the world. And he’s good, very professional.

MvH: You say “art dealer” when you speak about your son, not “gallerist” – are there still gallerists today that love art? Or only dealers that want money?
JS: There are certainly still people that love art. But the art world is different today, there are many dealers and there are professions that didn’t exist before – art critics and the like. Do you know (the book) The Perfume [by Roman von Patrick Suskind]? People are bewitched by the perfume of the main character. That’s how it is with art – if you understand it, you understand it, otherwise you do not.

MvH: You have six children with three women (He was married three times. His youngest son, Shooter, is two and a half.), houses on different corners of the world (America, Mexico, Spain), exhibitions everywhere … your life is complicated, is it not?
JS: I am first and foremost a painter, I make my own work, I have no assistants. I smash glass or porcelain, and paint it. Then I think “can I make this better?” When “yes”, I make it better, otherwise I start something new. This cannot be compared to the work-process of an artist like Jeff Koons (his works on different mediums pull in ten or twenty times higher prices and are put together by countless employees). It is not very complicated. Another good thing about my process is that I have no meetings! But it’s true, I’m busy and I’m all over the place.

MvH: How long do you work on a painting that is eventually sold for millions?
JS: Three months, maybe four … my son asks if I’d like to dine with him – he’s making lobster spaghetti. [JS has kicked off a text conversation on his mobile.] He should eat with his girlfriend – I’ll stay here.

MvH: Annoying question for you, interesting answer for my readers – where do you draw your inspiration?
JS: I see painting everywhere. I come here and see how snow falls on trees – others see only white. For me it’s a painting. I also see paintings in surfers on the waves. [Before this statement he took two shots of Grappa and spent ten minutes talking about the importance of surfing in the context of his decision to ultimately return to New York forty years ago and become an artist, instead of remaining a surfer in Hawaii.]

MvH: What is more important? To know how to paint or to see paintings?
JS: I didn’t learn anything in school. In the winter of 1976 at 25, I traveled to Italy and didn’t even have enough money to buy mozzarella, but I saw the works of the most famous painters – Duccio, Piero della Francesca, Caravaggio, that’s where I learned everything.

MvH: You lived with your parents, first in Brooklyn, later in Texas. How did you get to Italy?
JS: Living with my parents was not living, it was an imitation of life. Everything was ordinary… I needed to escape.

MvH: When you returned to New York in the early ‘70s, how was the entry into the life of art and artists? Your youth in Texas and Hawaii likely didn’t prepare you for it …
JS: Yea, I knew very little about the artists that were new and interesting at the time. Jasper Johns, Robert Rauschenberg and so on, but I also had a spot at the Whitney Independent Study Program and there I met many artists - Richard Artschwager, Malcolm Morley, this was an entire new world for me. Or at Max’s Kansas City (an evening cafe that artists went to), where even though it closed in 1974, I met Willem de Kooning or Larry Poons … In short, I had a wonderful opportunity rather than privilege to operate in this environment, and was able to follow my own institution.

MvH: And you were also interested in emerging German artists, unusual for an American in New York, isn’t it?
JS: Actually I became interested in their works later. But when I was in Italy, arte povera [“poor art” - an important art movement in Italy during the second half of the 20th century] was in/current. I saw Joseph Beuys draw a on a paper bag to which a bone was attached in Studio Marconi [a gallery in Milan] - that was a powerful influence on me. And in an optician’s shop where I had just landed, the owner asked me if I would like to meet her neighbor because I was an artist and he was an art collector. So I went to Varese to see the collection of Giuseppe Panza di Biumo (who was one of the most important collectors in the world at the time), of whom I had not yet heard about. He had several early works of Claes Oldenburg and Bruce Nauman. It was very impressive, but I didn’t show him my pictures - I found them to be too messy, he had a lot of works by minimalists.

MvH: As a painter - I think - you answer only to yourself, but as a film director - where there are 50 people on the set and almost as many doing supporting jobs, you are unable to decide alone …
JS: I still only answer to myself.

MvH: Oh?! Really?
JS: Joseph Beuys once said to me during a dinner with Heiner Bastian (a collector and curator) as Heiner spoke of collective guilt, [Beuys said to me] “There is no collective guilt. I am guilty.” And I thought: “That’s true.” When something - something that I made - is good, then I’m the one responsible. And when something is bad, the responsibility is still on me. It’s like that.

MvH: Very “German”, this collective guilt thing.
JS: Beuys was a very unusual comrade - he was truly cool. He was right. I made the film Basquiat after some “filmer” came to me to interview me about Basquiat. I thought to myself, “ok, I’ll help him”. Then I noticed that he was a tourist/amateur, he did it incorrectly, he didn’t understand anything. I bought the rights from him and made the film myself. Good people helped me out with it - Dennis Hopper, who was my friend, Christopher Walken, Willem Dafoe, Gary Oldman, everyone played along. They knew my paintings and wanted to be in the film. Dennis watched me and said “do you know what? It looks like you’ve been making films for forty years.” I received a really great education.

MvH: And investors, who came through for production costs, don’t they want a say?
JS: Basquiat cost $3.6 M to make. I took one million of my own money and the rest I borrowed from collectors who took my paintings as collateral. People learn in the movie business to never put their own money on the line but I didn’t do that, because if I did, the film would never have gotten made. I’ve once said “Hear everyone out, but don’t follow their advice”. Reinaldo Herrera said “We learn every day, but never put these learnings into practice. I find myself in the middle ground of these two positions.

MvH: When one listens to you, one gets the impression that you know nearly every important person on the planet. And, also interestingly, everyone knows you. How is this so?
JS: Yes, for example I’ve known Gianni Agnelli or Stavros Niarchos. Let’s just say those were very intense living people. People who thought it was important to be at the center of attention. Why were they interesting to me? I think it had to do with the fact that art, for whatever reason, took the place once held by religion. And it was a reflection of the fact that all of a sudden the art world became so important. Naturally there are many people who have a lot more money than me or any other artist, but they cannot participate because they cannot do what I do - namely art.

MvH: But therefore they can buy your pieces and the works of other artists.
JS: Yes, they can buy the works. But they cannot buy you - unless of course you sell yourself. But when you’re not hugely interested in money, they have nothing in their hand that they can use against you. Tom Waits said: “Money’s just something you throw off the back of a train”.

MvH: Famous quote.
JS: Tom is famous. He also said “You can have the most expensive palace but without love it’s merely a hut.” These are important experiences - when you lose something that you hold dear. A love that comes to an end, separation, divorce, how your life falls apart around you … This feeling of loss, it’s super important. And the feeling of being unable to hold onto something is what I try to convey when I make a film or when I paint a painting. Or take the film Youth by Italian director Paolo Sorrentino - who nobody has noticed - which is to me the best film of the past year. It was a damn good film. The scene where the guy who looks like Maradona comes and dribbles the ball in the air …

MvH: As far as I know, that was Maradona
JS: … really?! Well, there you see. That kind of precision / talent if you have it, then you can die in peace. At that point it doesn’t matter what you did before, or do after. You and the world are as one, because - whatever. But now I have a question: Why did you want to interview me?

MvH: Because I do an art edition of WW-Magazin - and wanted to have you on the cover. And what were you prepared to give me an interview about?
JS: I do it for my son. I support his gallery (his son, Vito - 29, opened a gallery last year in St. Moritz in the former exhibition space of Bruno Bischofberger, and had an exhibit of Julian Schnabel’s works titled 6 Rose Paintings from February 14 until March 8 [Bischofberger is Julian Schnabel’s gallerist and Vito’s godfather]. I don’t mind giving an interview. It’s work. Or as Laurence Olivier said “Actors are vain, but when I have to speak with the press, they (the press) need to pay me”.